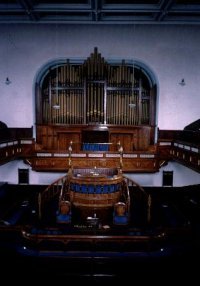 Ebenezer Wesleyan Chapel, Caernarfon,
The chapel was originally built in 1805/6 to the design of Evan Roberts of Denbigh. It was rebuilt/modified in 1825/6 in the Gothic style to the design of John Lloyd of Caernarfon and then altered and restored in 1875/6 to the design of Richard Davies of Bangor.
CONTACT US
Every town and village in Wales has its chapels.They have had a significant role in the development of Welsh society. Their striking buildings - sometimes homely, sometimes extravagant oddities, but often magnificent - have contributed greatly to the appearance of the country. Today both congregations and buildings are in rapid decline.

Capel was formed in 1986 as a voluntary society. Today we have over 300 members in Wales, England, Scotland and the United States. We are always glad to welcome new members!
more...
Array

Cynefin This project of the National Library of Wales may be of interest to historians of chapels. The project aims to digitise all the tithe maps of Wales. These maps show about 95% of the land of Wales as i (16-02-2016) more...
All the news